The fascinating Rhine metropolis was founded by the Roman for more than 2000 years ago. Cologne is the biggest city of North Rhine Westphalia. The leading media city in Germany has the largest university in the Federal Republic. The Cologne Cathedral is a renowned monument of German Catholicism and Gothic architecture and is a World Heritage Site. It is Germny's most visited landmark,attracting an average of 20,000 people a day.

Join us for a pleasurable bicycle tour through Cologne escorted by a spirited and knowledgeable tour guide - native-speaker - . Enjoy the old section with its Roman remains, the last traces of the city founded over 2000 years ago. Discover the green belt and the Rhine Park on the right riverside with its fascinating panorama. See the Kölner Dom and the philharmonics, as well as Cologne’s modern architecture and the restored houses of the ancient marina.

Cologne is the leading city of media and music in Germany with numerous national and international radio and television stations. Every day film shootimgs take place here in this cathedral city. In addition Cologne is the biggest university town of Germany. 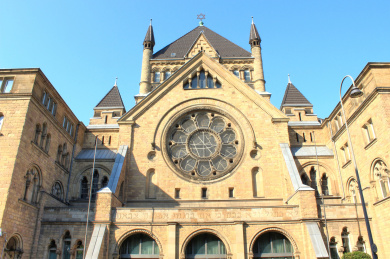 One of our special tour:

Since 321 the existence of Jews in Cologne has been documented. Learn more about the oldest Jewsish Communitiy north of the Alps by bike.